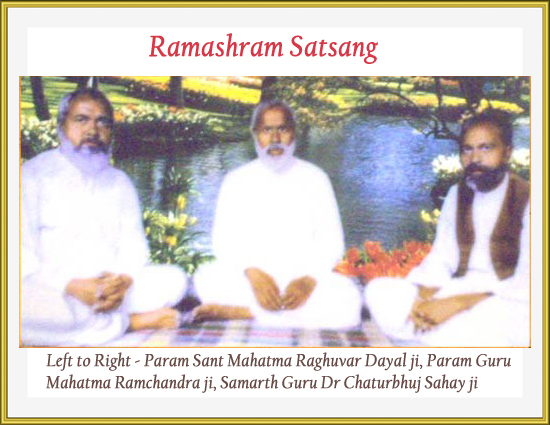 It’s raining nonstop in northern Virginia I thought why don’t I start reading SKA (Sadhana Ke Anubhav, a 7-volume book on Guru Maharaj’s own spiritual journey) one more time. As whenever I read this great text, I tend to derive a great new perspective and a new and unique meaning. In the first few pages, Gurumahraj tells a little about himself, that he was born in a very spiritual family which stirred a quest in him to seek higher consciousness. He always knew that there is more to spirituality than performing daily rituals and prayers. So, he started learning a lot of yogic practices like raj yoga and hath yoga, etc but that was not satisfactory enough for him and he wanted to look further.

Gurumaharaj and a few of his friends joined Arya Samaj, a popular spiritual society of that era. He liked the philosophy of Swami Dayanand (founder of Arya Samaj) and started following his concepts. Eventually, Arya Samaj grew bigger and gathered a lot of followers. As with all popular societies, politics and hypocrisy become a big part of it, which happened to Arya Samaj. So, Guru Maharaj moved away from there, too. I too belong to an Arya Samaj family and I totally understand why he felt the disconnect and moved away.

Meetings were normal, but Guru Maharaj started feeling a strong bond with Dada Guru. Guru Maharaj also had the feeling that Dada Guru was more than what he portrayed to the world. Guru Maharaj directly or indirectly kept bringing up spiritual topics but Dada Guru kept dodging all such attempts.
Just around this time, the epidemic of plague started spreading in India. Guru Maharaj and Dada Guru decided to send their families to remote and less populated areas, to keep them safe. And they both moved to a fairly large beautiful bungalow that once belonged to a royal family and was available at this point. It was situated at the top of the hill, away from the city.

Dada Guru had already started a process called ‘tavajah gaybana’ on Guru Maharaj! Yeah! A big word from the Urdu language with deep meaning! It means raising someone’s consciousness without his or her knowledge. Mostly the process takes place while the person is sleeping. Oh gosh, I am getting goosebumps just thinking about it.

They both started to stroll together and just talk about many aspects of life. One time Dada Guru was humming some tune, and Guru Maharaj asked him that ‘you sing so well, so why didn’t you pursue music?’ He replied that ‘yes, I love music but gave it up to pursue something higher.’ That was the biggest cue to Guru Maharaj that Dada Guru is no ordinary person. He is definitely enlightened and very close to divinity because there is only divinity above music.

And one day they were walking by the River Ganges and Dada Guru took Guru Maharaj on a nearby trail, slightly uphill where there was a clean hut-like empty structure and where nature was in abundance. That hut must have belonged to a yogi who must have stayed there for a bit and then left.

Wow, the whole scene seems so serene to me. I wish I could portray the scenery coming to my mind.
Coming back to the point, Dada Guru had him sit in front of him and close his eyes. As he closed his eyes, he felt light entering his heart and soon he couldn’t feel his body. It was an ethereal experience where he could clearly see the material world and the cosmic power of the universe!!

But soon he was brought back to Mother Earth and Dada Guru told Guru Maharaj that his journey has been started at one of the highest levels. Dada Guru used his powers to take Guru Maharaj to a state of consciousness called Sampragyat Samadhi.

OMG, can you imagine that happening to you!!

After this initiation, Guru Maharaj was told to climb all these stages by himself with the help of practice and Dada Guru’s guidance. And he was also told never to use your power for worldly things.

It took Guru Maharaj 7 years to reach the ultimate stage of Anandmaya and beyond. Plus he climbed up and down three more times. He had many ups and downs during his journey but never gave up on his practice and his faith in Dada Guru. His devotion and his practice were so intense that Guru Maharaj started looking like Dada Guru Maharaj inside and out, even their physical appearance became similar.
And finally, Dada Guru instructed Guru Maharaj to spread the word and his mission to make everyone achieve higher levels of consciousness! And to be a better human being!

Gurumaharaj gave us all a tried and tested formula to pursue our spiritual goals.
I am so grateful that I am under His Umbrella
Till next time.
Sadar Pranam to all🙏
Keep practicing your sadhna.

The Power of Chintan