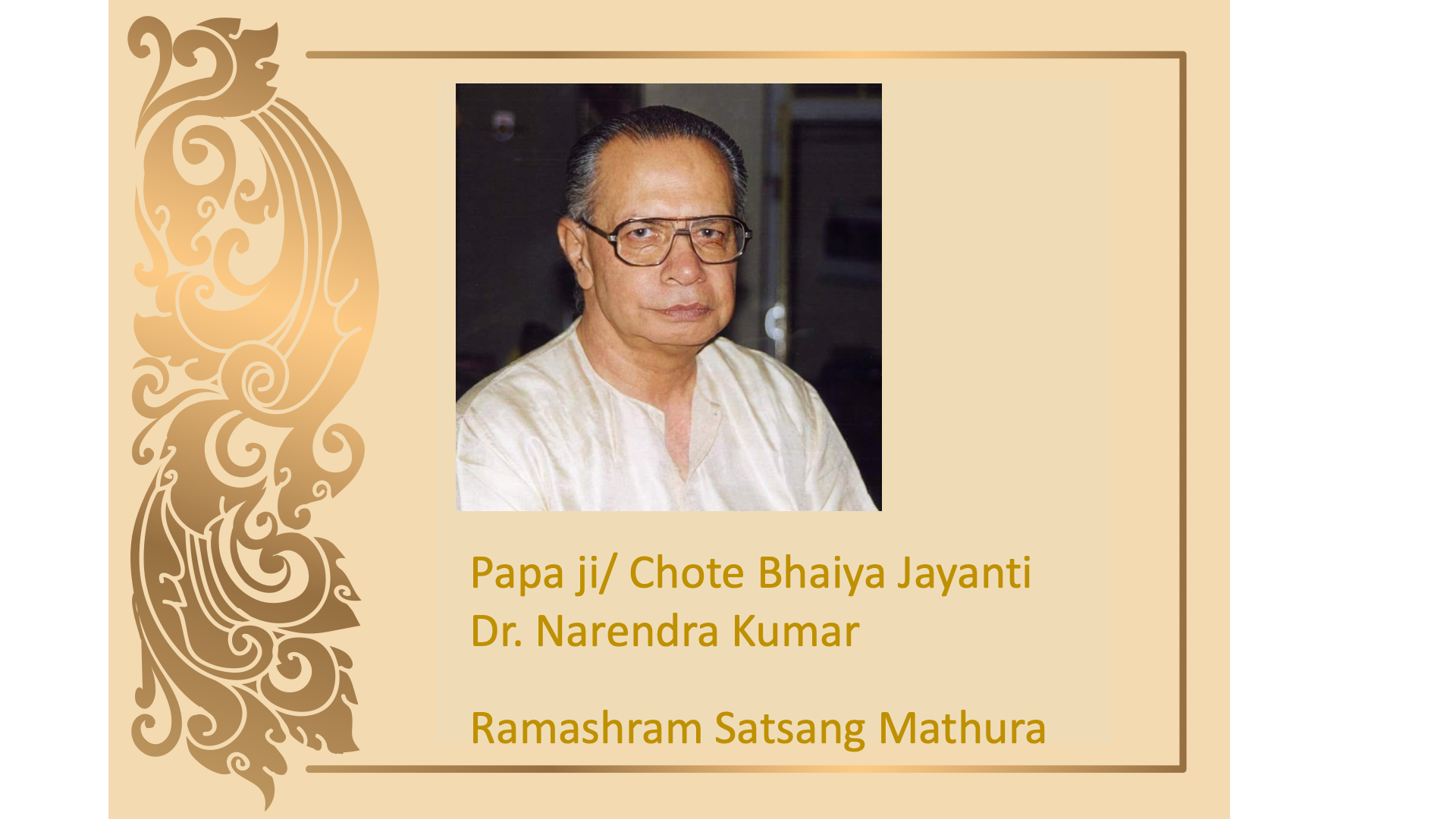 As we embark upon a spiritual endeavor, such as joining satsang; we make a solemn pledge to seek God and forsake worldly desires. However, as time passes, our objective becomes shrouded. Like ‘Nachiketa’ (a divine child in an ancient Indian story), we are unable to maintain awareness, strength and begin to lose focus. We may well forget the very purpose of joining the Satsang.

The first error we commit, or the very first veil that obstructs our spiritual vision, comes after we start the process of meditation with gusto. We may forget the very goal of meditation, which is to seek God, and start believing that the meditation process itself is our goal!

Take the example of a saint who asked a disciple (Sadhak) to chant a mantra one and one quarter of a million times. By doing this, the saint’s objective was to enable the disciple to achieve oneness with the Divine by chanting the mantra. Instead, the disciple became overly concerned with completing the one and one quarter of a million chants, thus making a mistake. A mistake occurred because the disciple created duality by being overly concerned with maintaining the perfect count, which resulted in separation from the Divine. May all disciples stay alert, for all are at risk of making the same mistake.

During our meditation, the aim is to remove all thoughts from our mind. Yet we begin to argue with our own mind as it starts to wander and thus bring in various thoughts. Our aim then changes to fighting with our thoughts in an attempt to suppress them. Due to this strife with our mind, we are unable to achieve a state of inner peace by being thoughtless. This wastes a lot or our precious time as well. Surprisingly, the state-of-mind where many thoughts arise during meditation is very important and necessary. For, it helps cleanse our sacraments or mental impressions (sanskaar) and purify our minds.

The third curtain descends when the disciple begins to think as to how they can expand and spread Guru’s mission. What needs to happen here is that the disciple spreads the words of their Guru to others. Instead of this, the disciple develops a desire to ‘help’ the mission by becoming a preacher / guide or Guru himself.

Furthermore, developing pride and ego of possessions such as wealth and/or spiritual knowledge becomes a burden upon the mind and body.

The pride one gets from owning most material goods can be settled; the pride and the ego, as in gaining spiritual knowledge is near impossible to remove.  One can be free from this burden only by the grace of their Guru.

Another veil that can obscure the goal of sadhana or meditation is the feeling of nearness to their Guru. The disciple begins to think that their Guru is near to him and always listens to his requests. He starts expecting other disciples to ‘respect’ him, the same way as they respect their Guru. The truth is that Sadguru’s state is beyond the realms of worldly illusions. Sadguru belongs to no one and at the same time belongs to everyone!

Once Guru and God are seen as one by the disciple, the initial three endpoints change into two. It’s like a single straight line, that separates the two points of disciple and Guru. The next step is to merge the two endpoints into one. This process was explained to Guru Maharaj by Dada Guru Maharaj.

Dada Guru Maharaj explained that in our satsang, there is neither a Guru nor a disciple because the formalities in the relationship of Guru and disciple as separate entities result in duality. In the presence of duality, they cannot merge into one. He, therefore, advised and guided Guru Maharaj to shun the tradition of Guru – Disciple and instead have unconditional love for all; so much so that everyone becomes yours while you become for everyone. This is how Guru and disciple can be merged into one through Love. This guidance has been followed by all the patron saints in our satsang (including Guru Maharaj, Jiya Maa, Pandit ji Maharaj, Bade Bhaiya, Bihari ji etc.).

In our satsang, there is a constant stream of love that flows. No one here is a Guru or a disciple. Everyone is like a family. Love enables others to be seen as one’s own family. In this satsang, no distinction is made between people, all are simply considered as members of a large satsang family. Therefore, it should be each disciple’s goal to increase his depth & range of love to such an extent that everyone appears to be like a member of their own family.

Dr. Arvind Kumar is a Parkinson's Disease specialist working in the UK. He completed his medical degree in Jaipur and subsequently came to the UK. He has been associated with Ramashram Satsang Mathura since the mid 1970's.

Our Society and Present Times