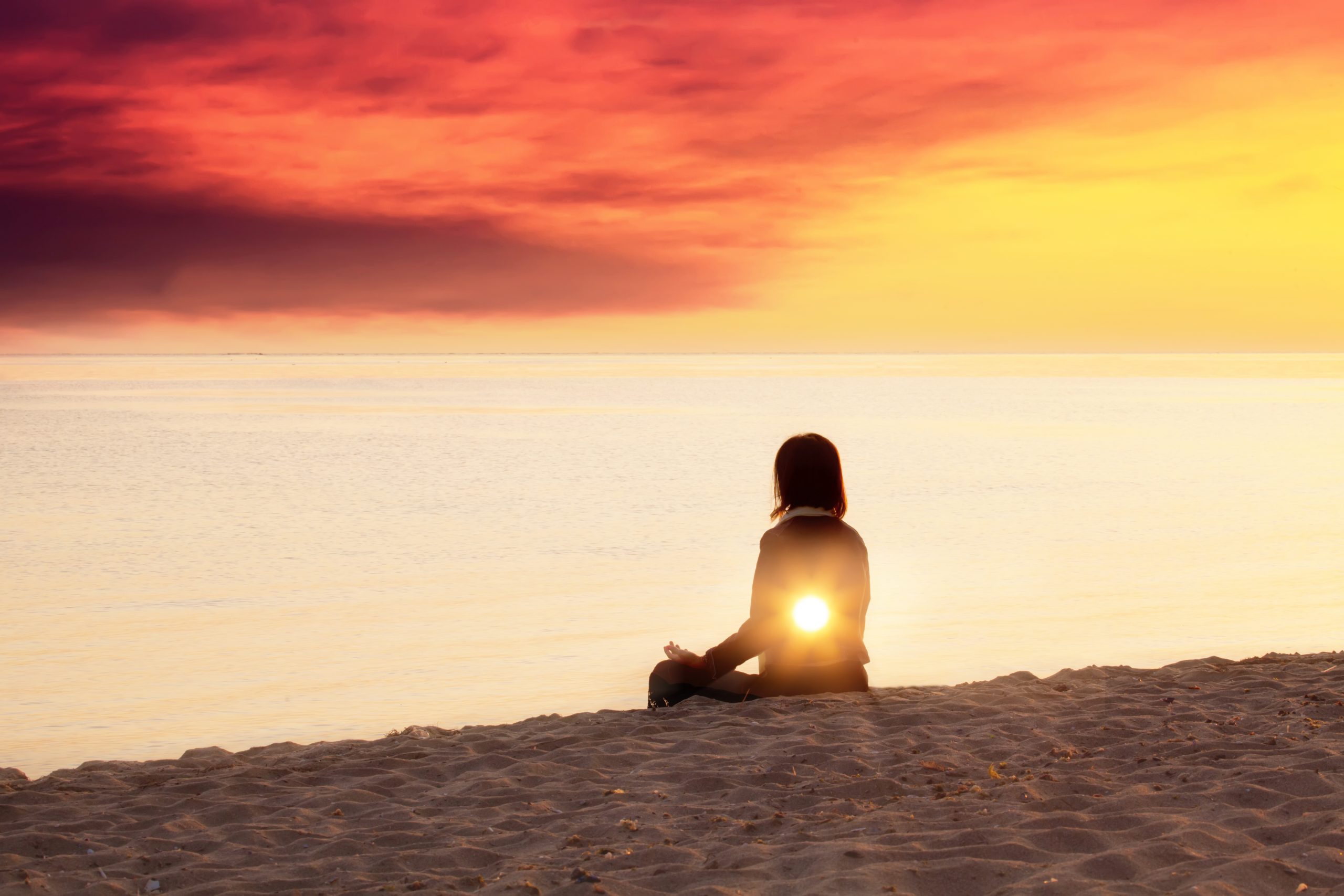 Long ago, an ascetic was sitting under a tree deep inside a dense forest, which was almost impossible for human reach. He wanted to renounce life and had given up food and water for the past five-six days, due to which he had become physically very weak. Suddenly he heard the voice of someone calling him, that “Oh sage, the process of the yogic practice that you are following was wrong”. He realized that since it was not possible for humans to reach there, it must be a divine voice.

“Who are you?”, asked the ascetic. “I am a parrot who lives on this tree. I wanted to caution you that the process of your yogic practice was not right,” said the parrot. The ascetic told him that he had been practicing this eight-fold yoga as prescribed in the Yogsutra by Maharshi Patanjali for his entire life. He had not yet accomplished his objective of liberation. He wanted to renounce his life so that he could continue with his practice in his next birth from the same state.

The baby parrot replied that renouncing his life would be meaningless as it would be difficult to achieve different results from the same practice. He said that you would not achieve your objective of actualizing God even in your next life with these practices.

The ascetic asked for the bird for advice. The parrot advised him to meditate in the heartland instead of renouncing life so that he could achieve his objective with ease in a natural way. The ascetic understood the parrot’s suggestion. He got up, bathed, and broke his fast by eating fruits and drinking water and sat for his meditation, and felt better. That parrot was none other than Lord Buddha in his previous birth.

Now the point to ponder here is, what is the right way of practicing the eight-fold yoga so that we can realize God naturally and easily. Maharshi Patanjali has propounded this system of yoga for achieving liberation and union with God. Whatever system we follow, these eight steps would always be there.

Since times immemorial, yogic practitioners follow this eight-fold (ashtanga) yoga by starting from Yama and gradually moving through other steps in the given sequence. But, following the practice sequentially is time-consuming and difficult. Therefore, very few practitioners reach the stage of unison and integration with the Almighty. The ascetic, too, was practicing yoga sequentially through the eight stages. Hence, he was facing difficulties.

We all are aware of the usefulness of postures and breath control in Yoga. With the withdrawal of senses (Pratyahara), we make the propensity of our thoughts inward from being wandering outwardly in this world. Once our thoughts become inwardly driven, we concentrate on the object of meditation(Dharna) with pointed focus and then contemplate (Dhyan) on it in the next stage. While practicing contemplation, we lose the awareness of ourselves and our surroundings, which is the stage of union with God or merging with the supreme consciousness, what we call Samadhi.

We take the literal meaning of several things prescribed in the eight steps to yoga. For instance, one of the five things prescribed under the first step- abstinence is non-violence. Generally, we associate non-violence with action. However, true non-violence is abstinence in all three stages – action, speech, and thoughts. While we can practice non-violence in terms of action or speech it is difficult to ensure that no violent thoughts emerge for others. Such non-violence gets mastered when the fifth sheath on our soul is cleared or Aanandmay Kosh is crossed, which is the realm of love and bliss. In this stage, we see God’s manifestation in everyone. Hence, we neither see anyone harming us nor favoring us. At the same time, we cannot think of harming anyone else.

That is why Guru Maharaj used to say that the eight-step yoga is not about accomplishing samadhi by climbing the steps sequentially. Rather, it is the practice of coming down from the top to the bottom level. He said that by mastering the last four steps, the first four steps are automatically accomplished and sorted out. As per him, in this system, the practice of all the eight steps should be done simultaneously and side by side.

Bade Bhaiya or Dr. Brajendra Kumar Ji had gone one step further to proclaim that the real solution for all spiritual challenges lies in the practice of the last three steps of the ashtang yoga – they are concentration, contemplation, and the unison with supreme consciousness. Because Pratyahar is like a doctor telling the patient to drink more water. And the first four steps of yama, niyam, aasan and pranayama are like a doctor telling the patient of what all things he should be avoiding or doing.

Hence, let us understand the process of eight-step yoga based on our sadhana propounded by Guru Maharaj. In our sadhana, after sitting in a comfortable posture, we imagine that our guru or God, in his illuminated form, is sitting in front of us. We see his light permeating in our heart and then meditate on that light. The mind has a natural tendency to wander in the world. But as soon as we come to know that the mind has drifted away, we again follow this process from the beginning of seating our Guru in front of us and contemplating his light in our heart. This way we continue our practice of slowly withdrawing from the world and practicing concentration and contemplation.

When this step of practicing concentration matures, a time and stage come when we lose the sense of ourselves and experience only light all around us and a state of pure Bliss. This is a state of Sata and is known as the awakened samadhi which is in the manomay kosh ie realm of mind. In this state, the mind of the practitioner becomes sharp and focused. Slowly-slowly, this light also disappears from the practitioner and he goes into a dream like state. This is known as a swapna samadhi. In this state our previous Sanskar gets decimated.  Hence in this state we encounter variety of thoughts, as if we are seeing dream. This is very important stage as the interiors are not purified till the Sansakars are decimated. This stage remains there from a few months to a few years for the practitioners. Pure state of the interiors is the third stage of the manomay kosh, which is a state of Tama and is known as Sleep samadhi.

After this, the Manomay Kosh is crossed where the mind becomes free from its impurities and the practice of making the mind free from impurity becomes complete. After accomplishing this stage a practitioner does not have to engage himself in any specific yogic practice. He crosses the other stage of Vigyanmay Kosh by purifying his intellect and wisdom and Aanandmay Kosh is crossed by total surrender to his guru. After crossing the fifth and final stage, he becomes one with the supreme consciousness.

By practicing our sadhana, when the stage comes where the practitioner loses the awareness of self, automatically the posture becomes sorted. As we lose the awareness of self, our breathing also become very-very slow. In the dreams, when our Sanskars are decimated, the yama and niyama are automatically completed and in the Sleep samadhi, the Sanskars are completely decimated and the yama – niyama are completely fulfilled.

That is why Guru Maharaj has described our sadhana as achieving the same objective with a top-down approach. When we actualize the last four steps, the bottom four are automatically solved or actualized. So, by starting the sadhana from pratyahara and reaching the ultimate destination of samadhi, the sadhana of ‘ashtang yog‘ is fully mastered.

Translated and adapted from an article published in Adhyatama and Vyavhar (Spirituality and Conduct) written by Dr. Narendra Kumar Ji or Papaji or Chote Bhaiya as he is fondly called.

I was into the Satsang since childhood or rather born into the Satsang family and was never formally initiated. It came so naturally. But my father taught me to make Service as an integral part of my life. A Mining Engineer by education, moved around with my job first in Khetri Copper mines of Rajasthan and then into different parts of the country as a marketing professional. Currently, settled in Pune. Being born in the Satsang family, I had the privilege to experience the entire lineage both physically and Spiritually except I couldn't have the darshan of PP Guru Maharaj. Being in Spiritualism is like being in a journey all the time and it's all about the unique experiences that we gain during our journey on this path. Any job that is assigned to us in the Service of Guru Maharaj is our fortune and privilege. Only He is the doer and we are all Observers. May He continue to be with us today and always.