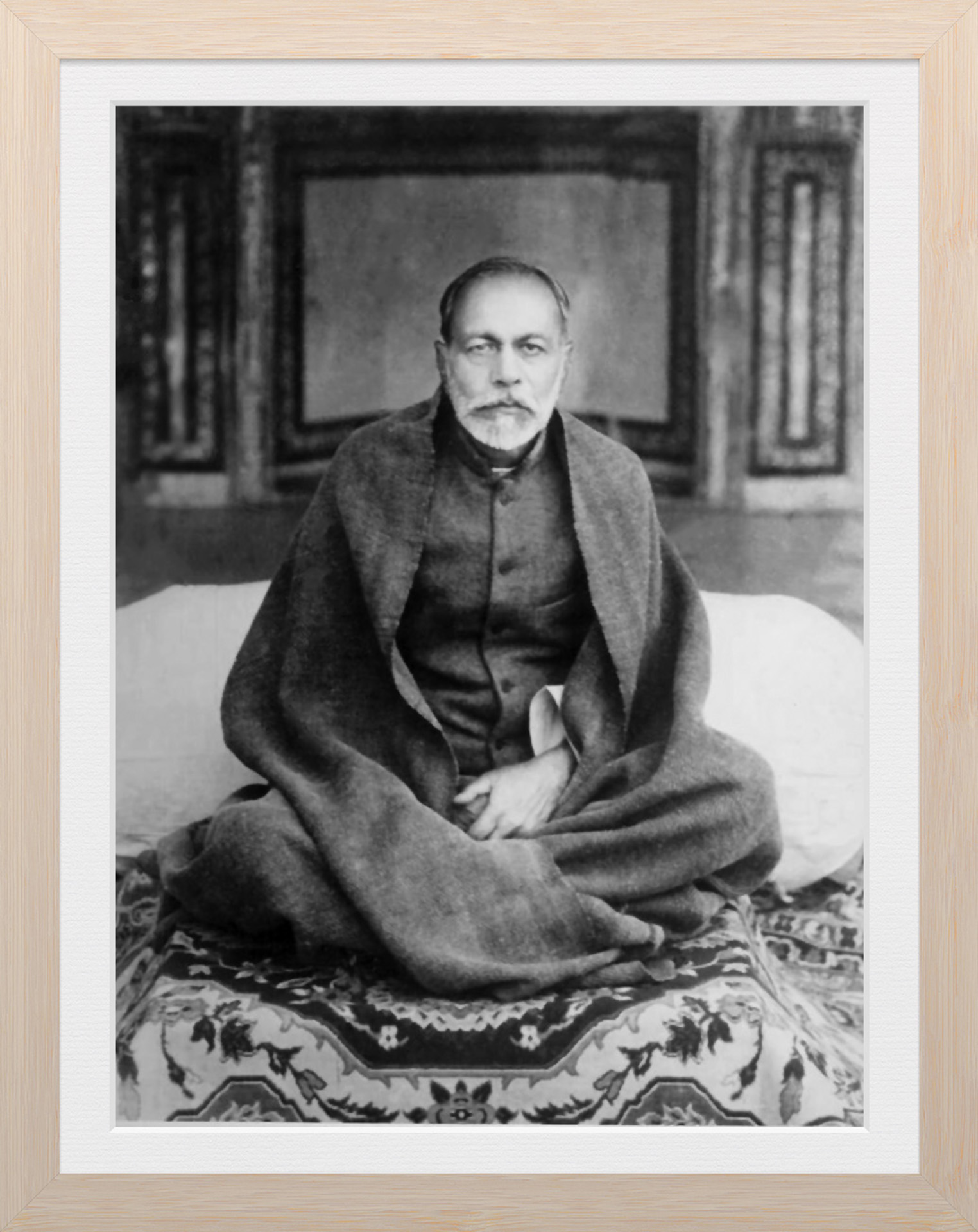 Guru Maharaj answered plenty of questions about the practice of Satsang from spiritual seekers and followers. Later, Guru Maharaj published those questions-answers as a series. It’s published under the name Adhyatmic Visheya Mimansa which translates to ‘The Subject of Spiritual Contemplation and Ideas’. 70 years on it is still relevant and continues to clear doubts of seekers and followers. Having it straight from the Master himself is like his blessings to all of us engaged on this path.

A gentleman who was very well educated, and was a preacher of a religious society, was visiting Mathura. He heard my name from somewhere and decided to call on me. I will now describe the conversation I had with him.

Question: Can I ask you what you believe in?
Answer: Finding the ocean which is filled with eternal peace and happiness, is what I believe in. This can also be called the human religion.

Question: Excuse me, but this is not what I meant to ask. I wanted to know which society, which creed, or which religion you belong to.
Answer: There is good in every religion, and in every religious society or organization lies the ability to uplift humans. At the same time, however, some dogmas and traditions of the followers of various religions have created differences and divisions. I believe in selecting good things from all faiths and ignoring the empty, ritualistic traditions from each one of them. I do not have antipathy towards anyone. I treat people of all religions the same. Therefore I would be correct if I say that I believe in all religions, and it will also be valid if I say that I do not believe in any religion. My path starts from a place where the divisions created by the different religions are left behind.

Question: What will I have to do to start the practice that you have propagated?
Answer: You will have to make an effort to come here from where you are staying, and you will have to sit in front of me. That is all that you would have to do.

Question: Is there any other special preparation that I will have to do?
Answer: You will have to separate yourself from your pride and prestige and bring yourself here with the mental makeup of a student. For a short period, you would have to forget whatever you have learned before, and just follow the instructions given to you. People who consider themselves knowledgeable, and the ones who hold prestigious positions, are the ones who have a tough time doing this. They do not want to feel small by lowering their prestige and relinquishing their pride. Their mind does not allow them to go that route and this creates an obstacle for them. Even if such a person somehow overpowers his mind and commences on this path, success remains in doubt until he truly starts believing that he is small and needs help.

Question: Can the knowledge gained from reading books and scriptures help to master this?
Answer: Books have described and mapped the path to the outer door of this magnificent palace. The amazing visuals, the miraculous joys, the cool and refreshing fountains, and the captivating flowerbeds which exist inside this palace can only be experienced by someone who actually enters it. These cannot be described in spoken words, and their description cannot be penned down either.

Question: Do pranayama, the art of breath control, and Japa, the repetitive mantra recitation, have a place in your practice?
Answer: There is no need for any kind of action or physical effort in our practice. One has just to become an observer and sit. Our practice starts where actions end.

Question: Would one have to quit any traditional religious practice like morning and evening prayers etc. that may be a part of someone’s routine?
Answer: Not at all. This practice will also become a part of that activity and will result in advancement in whatever one was doing previously. This practice will calm the restless mind and enhance concentration. Whatever one was trying to do before would be more effective with the now better-concentrated mind. A prayer said without the engagement of the mind does not accomplish anything. On the other hand, even a five-minute prayer offered with a concentrated mind bears positive same-day results. Peace and happiness prevail all-day.

Question: What would be one’s time commitment in this practice?
Answer: Fifteen or twenty minutes, or a maximum of thirty minutes of practice at a given time. One does not have to go beyond that. One can accomplish everything with just that much. By regularly practicing that much every day, one can acquire the knowledge of the essence underlying everything, and realize God. That much is enough to activate and gain control of the powers which lie dormant within us.

Question: Some say that one should meditate at the agya chakra (spinal center) level, and some recommend meditating on the heart. Which one of these is better?
Answer: Since ancient times, two separate paths for spiritual upliftment have existed. One is the path of Yoga, and the other is the path of Upasana. The group of people who follow the path of Yoga believe that our ultimate aim is distant and that one has to progress through numerous stages and countless obstacles to reach there. The second group is the one who believes that what we seek is really close to us and is present right within our hearts. Instead of relying on actions, they turn their attention inwards, and with uninterrupted concentration, try to search for it in their hearts. This second path is the path of Upasana.

The Upasana path followers consider meditating on the heart better, whereas the followers of the Yoga path consider the agya chakra ( spinal level) to be superior. Both of these beliefs are correct. Our scriptures also tell us that the supreme power is farther from the farthest and nearer than the nearest. For the followers of the yoga path there are several stages, from the guda chakra ( root, Maladhara) to the Brahmarandra (Crown, Sahasrara). For the followers of the Upasana marg, the only context is that of the heart. Out of these two paths of Yoga and Upasana, none is superior or inferior to the other. The only difference between the two is the relative ease and difficulty of achieving what one is aiming for. The followers of the Upasana marg can get to their ultimate aim faster and with less effort. The yoga path followers have to first deal with the special powers they develop along the way. They have to carefully prevent themselves from getting entangled in these powers and progress to their ultimate goal. This path requires more control and effort.

Question: Are stuti (words said in the praise and glorification of God), and prarthna (prayer), which are commonly a part of traditional practice, not Upasana?
Answer: Both stuti and prayer are actions and are not considered Upasana. Upasana is at a level that is higher than actions. Where actions cease, Upasana begins. During Upasana, nothing is spoken and no action is performed. With full concentration, the mind is focussed on one thought, our aim, God, or the ultimate. If the mind wanders we have bring it back to the same thought time and again, repeatedly. By continually doing this, there comes a time when the practitioner starts feeling and experiencing that he is actually in the presence of the ultimate. This state of feeling the actual presence of the almighty is Upasana. Stuti should be performed before Upasana and prayers should be said when one is in the state of Upasana. Stuti, which are words in praise of and in God’s glorification, when done before Upasana does help in bending the flow of thought towards the almighty. It should be performed with full concentration, with no other thought but that of the almighty.

Prayer is when we are asking for something, either for ourselves or for others. When the almighty is so far away from you that the prayer does not even reach him, how would he know what it is that you are asking for, and how would he fulfill it? That is the only reason why after chanting god’s name thousands and millions of times, people often achieve nothing. Such a prayer, done in isolation, and without Upasana, does not get the job done. First, with the help of Upasana, you have to get him close to you and then tell him what it is that you desire. He is the father of all, and wishes well for everyone. He will certainly grant you what you seek. You do not have to ask him loudly and repeatedly, and you do not even have to spend hours and hours making your request. As long as you first get him close to you, and then sincerely ask even once, he will hear even your whispered words, and fulfill your wish in a moment. A prayer said in conjunction with or in the state of Upasana yields prompt results. That is the reason prayer should be performed in the state of Upasana.

The Gayatri Mantra, which is amongst the best of the Vedic mantras, is also a prayer. The Gayatri Mantra seeks purification of the mind so that it inspires us towards the right actions. A pure mind can give us ultimate knowledge, can help us realize God, can elevate us above the cycle of birth and death, and can bring about liberation. But what the Gayatri Mantra seeks only becomes possible when it is said in the state of and in conjunction with Upasana.

Upasana gives us knowledge that builds gradually by our daily and continuous practice. This accumulated knowledge is what liberates the being from all attachments.

Question: What scripture is your practice based on?
Answer: This is a practice that lays out a path of accomplishing what is described in the Bhagwad Gita.

In this practice, the Guru is the doer, and the practitioner is an observer. The practitioner has to sit in front of the Guru, turn his attention inwards, and just observe. That is why this can be called drishta yoga. Since one is not doing anything himself and just sitting dependent on his Guru, it can also be called Samarpan yoga. One cannot acquire this knowledge from a book. It can only be acquired from an experienced Guru. Although such accomplished Guru’s are few, they do exist. When a person develops a strong desire, God himself makes arrangements and connects him with one

The Goals of Sadhana